Puerto Rican Ceviche is not native to Puerto Rico, but it is something that natives have adopted as their own and put a new twist on it. This healthy meal works particularly well as a light and refreshing snack for hot and humid days.

Originally from Peru, ceviche is traditionally made from fresh raw fish marinated in citrus juices, such as lemon or lime. People often use spices like chili peppers on it, too. Additional seasonings, like chopped onions, salt, and coriander, may also be added.

This style works particularly well with all types of seafood, tropical flavors, and fruits. The latter blends exceptionally well with the plate. The acid from the limes and lemons changes the proteins’ structure in the fish, essentially “cooking” the fish without using heat.

All of those ingredients make for excellent appetizers. In addition to that, certain recipes add tortilla chips or roll the ceviche in a warm tortilla with lettuce.

There are other excellent ceviche combinations that take advantage of the tropical surroundings. Seafood Mango Ceviche and Scallop Mandarin Ceviche are the most famous derivations.

Due to its green ingredients, it can be considered one of the healthiest dishes you can find when vacationing in Puerto Rico.

This is the basic ceviche recipe to get started with. However, the possibilities and combinations are endless. The ingredients are:

How to Prepare It

After gathering all the ingredients needed, it’s time to prepare the Puerto Rican shrimp ceviche.

First, put the fresh Devein shrimp under cool water and remove the shells from it. Chop them into smaller pieces depending on their size. If shrimps are small, there is no need to cut them. Add them into a bowl and refrigerate them until needed.

Place the tomatoes, pepper, and cilantro under cool water too, and then chop the three ingredients. Slice the onions and garlic cloves very thinly, and juice the limes. Add everything into a bowl. Lastly, take the shrimp out again.

After drawing the shrimp, season it with lime juice and onions. Then cover it and put it back in the refrigerator for approximately 30 minutes. After that, add olive oil, ketchup, pepper, and salt. Cover it again and refrigerate one more time for 15 minutes.

Well done! Now your ceviche is ready to be served.

The modern version of Peruvian ceviche consists of fish marinated for a few minutes and served promptly. This was created in the 1970s by chefs of Peruvian and Japanese ascendance. Furthermore, an appetizer called “Leche de Tigre” is served along with the food.

How to Prepare It 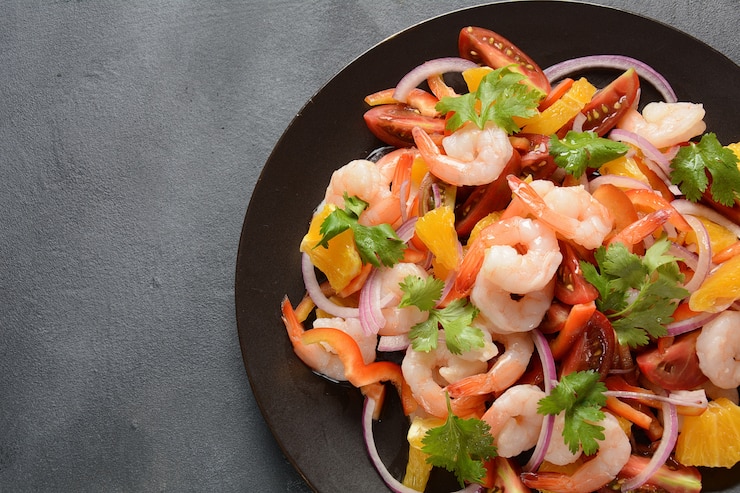 If you ever want to try other recipes besides the Puerto Rican ceviche, you can try the traditional Peruvian one, the most famous dish from that country. It’s even been declared part of the Peruvian national heritage, which is why there’s a national holiday for it!

In order to prepare an authentic Peruvian ceviche, you will need the ingredients on this list:

Wash and dry the fish, lemon, and lime. Then, cut it into small cube pieces, removing any skin, scales, or spines in the process. Try to keep the cube pieces the same size. Squeeze the lemons and limes into a bowl and remove the seeds.

Through a marination process, the lime juice will serve to cook the fish. Put the fish cubes inside, making sure all are under the juice. Cover it and refrigerate for around 25 to 30 minutes. Make sure all cubes are in contact with the lime from time to time.

Later on, prepare the garnish, wash the potatoes and place them in a steamer for half an hour while the fish cooks. Remove the potatoes’ skin once they’re soft and cut them into large pieces.

Peel and cut the plantain in half into thin slices. Deep-fry them into enough oil, avoiding the contact between the pieces. Stir from time to time, and then remove with absorbent paper once it’s ready.

Wash the peppers and onion, remove the seeds and cut into squares. Peel the onion into thin slices and cut the coriander. Take the ceviche from the refrigerator and add these ingredients. Wait for 10 minutes. Finally, add the plantain chips and potatoes.

You can now enjoy a tasty Peruvian ceviche!

It is known that this meal was born in Peru many centuries ago. Historians say that it may have originated from a local tribe called Moche, during the I and II century.

Other investigations state that during the Inca Empire, coastal locals consumed fish with salt and chili pepper. Then, changed the citrus they used for the ones that the Spanish brought.

There are also different hypotheses related to the “Ceviche” word etymology. Evidence shows that the first documentation of this word being used was in a song called “La Chicha” in 1820, sung by soldiers from Peru.

The word derivates from “escabeche”, from the Mozarabic language (Andalusian Arabic). Others say that it comes from the Quechuan word “siwichi”, which means fresh fish. 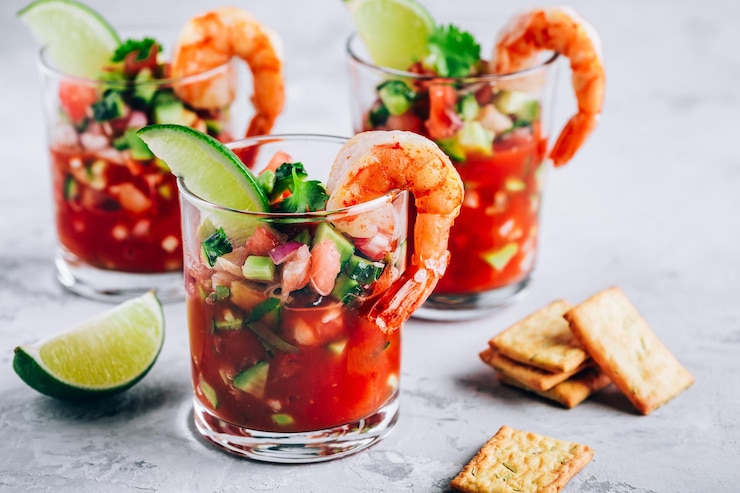 Modern ceviche was popularized after the 70s, and most Latin American countries have their own variants, different ingredients, and recipes.

The modern version of Peruvian ceviche consists of fish marinated for a few minutes and served promptly. This was created in the 1970s by chefs of Peruvian and Japanese ascendance. Furthermore, an appetizer called “Leche de Tigre” is served along with the food.

In Ecuador, shrimp ceviche usually has tomato sauce in it in order to achieve a tangy taste. Another style, called Manabí, is made with lime juice and salt, sometimes topped with peanut butter. This is one of the most popular ones.

On top of that, ceviche is prepared with various types of local shellfish, like black clams, oysters, spondylus, and barnacles. Served in a bowl with toasted corn kernels as a side dish, also includes fried green plantain chunks and chips, and popcorn.

In some regions of the country, rice is also served along with ceviche. Cooked sea bass, octopus, and crab ceviches are common recipes as well. Naturally, onion, lime juice, salt, and cilantro are a must in every dish of ceviche.

Chilean ceviche is often made with fillets of halibut or Patagonian toothfish. It’s marinated in lime and grapefruit juices with finely minced garlic and red chili peppers. Fresh mint and cilantro are often added to the dish as well.

Places like the United States and Mexico serve it in cocktail cups with toasted tortillas, as a topping, or for a taco filling. Ceviche cocktails are prepared in cups filled with tomato sauce. Other popular ingredients that are commonly used are shrimp, mackerel, octopus, tuna, and squid.

”Ceviche de Concha Negra”, also known as “Pata de Mula” is the most famous one in El Salvador. Almost entirely black, this recipe has a distinctive look and flavor that makes it special. Prepared with lime juice, onion, tomato, salt, pepper, hierba buena, and hot pepper.

Panama’s ceviche is prepared with celery, lemon juice, chopped onion, cilantro, peppers, and sea salt. What’s so iconic about this variant is the addition of white sea bass, which is served in almost every restaurant. Shrimps, octopus, and squids also accompany these recipes.

Lime juice, salt, onion, green pepper, squid, and tuna are the popular ingredients used in the Caribbean for ceviche recipes. Places like Puerto Rico use coconut milk. A conch salad is very popular in the Bahamas and south of Florida, too.

Diced fresh conch marinated in lime and onions is the core of this recipe. Moreover, a variation that includes tomato juice can be frequently found all around Florida. 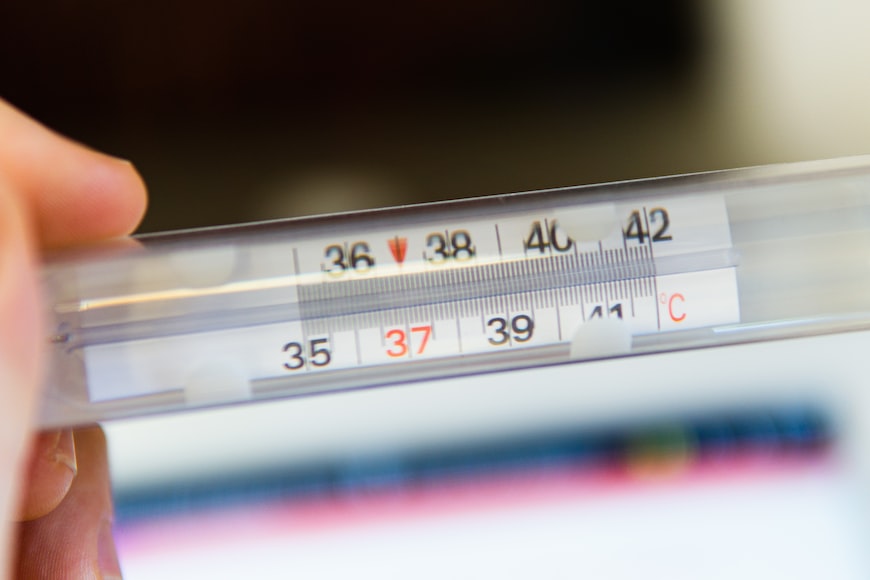 Ceviche is a prevalent dish in the pacific coastal countries of South America and the Caribbean. However, it is crucial to remark that bad sanitary conditions during its preparation can cause several health issues.

Raw seafood can be the vector for various pathogens, both viral and bacterial, as well as for many dangerous parasitic creatures. According to the Food Code of the United States Food and Drug Administration, specific microbial hazards can be rarely found in ceviche dishes.

What’s more, doctors recommend women avoid eating these dishes during gestation due to the health risks it can lead to if not prepared adequately.

Despite being a meal from centuries ago, ceviche has survived all these years. Anyone can eat it in most places in America.

If you ever decide to travel, you will be able to try any variant, Puerto Rican ceviche, the classic Peruvian recipe, or any of the unique styles Central America has in store.

You can find this recipe on our Yummly Page as well.  Hit the Yum Button so you can add it into your recipe box:
Yum