August 7th is National Lighthouse Day!  And we are celebrating by highlighting the lighthouse of Puerto Rico.   If you are a lighthouse fanatic, or even looking to add a little history into your next vacation in Puerto Rico, consider touring some of the wonderful lighthouses to be found in Puerto Rico.

Puerto Rico lighthouses are the product of a master plan prepared by the government in response to the needs of maritime trade, which during the 19th century was the only way to import and export products, and the main route for transporting goods from one place to another on the island. The requirements of the plan, the dominant architectural style in Puerto Rico, and the economy of the era are clearly reflected in the location, style, size, and functionality of these buildings.

The main criterion used for choosing the location of the lighthouses was the need to illuminate specific areas of the coast so that any ship approaching the island would always have one or more lights to guide it on its way to other countries, or in navigating to one of the local ports. For this reason many of the lighthouses were built in remote locations, some still difficult to reach, such as the Caja de Muertos, Culebrita, and Mona lighthouses. Remoteness, the need to manually operate the lights (electricity had not yet been invented), and the preference for integrating the tower and the keepers’ residence in a single building explains why the lighthouses are not isolated towers but rather homes equipped to meet all the needs of the families of that era.

The architecture of the lighthouses found in Puerto Rico is Neoclassic, a style dominated by simple but elegant straight lines. Only the Guanica and Rincon lighthouses deviated notably from this style, since they had complex brick cornices and parapets that reveal some Moorish influence. The San Juan lighthouse also has a Moorish touch which was repeated in the Ceiba lighthouse.

Our lighthouses can be separated into two groups with respect to their size and importance. Large or primary lighthouses, like those at Cabo Rojo, Maunabo, and Fajardo were built for two keepers and their families. Typically, the building has one door, a central corridor leading to the tower, and identical living spaces on both sides of the corridor. The main function of these lighthouses was to illuminate strategic points along the coast, and since the light had to be visible from afar, they were equipped with second, third or fourth-order lenses. Small or secondary lighthouses, like those at Arroyo, Ponce and Vieques, were designed for one keeper and his family. These lighthouses, which illuminated ports and areas reached marginally by the larger lighthouses, were equipped with fifth or sixth-order lenses.

The most notable element of its interior is the spiral iron staircase, imported from France, that leads to the building’s roof and then to the lantern. The tower’s height depends on the terrain’s elevation and the power of the lens: lights located at sea level require higher towers than those built on promontories, while primary lighthouses have to project their light from a higher point so as to reach further. The towers of the local lighthouses are short when compared to those of most Spanish lighthouses built in Cuba and the Philippines.

During the first decades of the last century electrification of the lighthouses started, first through  generators and then through power lines. The oil lamps were replaced by light bulbs and the clock mechanisms by electric motors. With the lights automated, resident personnel was no longer necessary and the structures began to be closed, abandoned, and inevitably deteriorated. The classic era of the lighthouses reached its end. After half a century or more of neglect, interest for the lighthouses has revived and several have been beautifully restored. Slowly they return to life and begin a second era, where as tourist attractions and as part of our cultural heritage they are witnesses of a very special past. 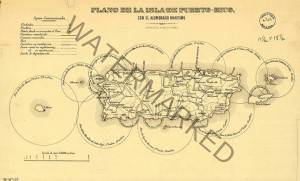 Puerto Rico’s 16 surviving light stations include 11 historic lighthouses built by the Spanish before the U.S. annexation. Some of these Spanish lighthouses are revered national monuments, but several others are abandoned and endangered. Fortunately, interest in lighthouse preservation has increased greatly in recent years, and major restoration projects have been carried out at Arecibo, Cabo Rojo, and Punta de las Figuras. But much remains to be done, and five Puerto Rican lighthouses remain on the Lighthouse Digest Doomsday List.

1900. Inactive since 1976. 52 ft (16 m) pyramidal skeletal cast iron tower with central cylinder, lantern and gallery. Originally painted black, the lighthouse is now covered with rust. The active light (1976; focal plane 323 ft (98 m); white flash every 5 s) is on a 40 ft steel tower. The original 2nd order Fresnel lens, the largest lens ever used in Puerto Rico, is in storage for eventual display at a proposed reseach and visitor center on the island. The lighthouse has deteriorated severely since deactivation and is in danger of being lost, according to an October 2004 article by Sandra Shanklin. The abandoned lighthouse has been added to the Lighthouse Digest Doomsday List. Isla de Mona, part of the Commonwealth of Puerto Rico, is located in the Mona Passage between the Puerto Rican mainland and the Dominican Republic. Uninhabited except when visited by biological and ecological researchers, it is accessible by charter and tour boats (6 hour trip one way) from Mayaguez and Cabo Rojo.

1889. Inactive since 1918, when the lighthouse was nearly destroyed by a tsunami. The lighthouse was an octagonal cylindrical stone tower with lantern and gallery, rising from a 1-story stone keeper’s house, similar to the Cabeza de San Juan lighthouse. Foundations and portions of the walls are standing.

1898. Active; focal plane 120 ft (36 m); white flash every 5 s. 46 ft (14 m) hexagonal cylindrical stone tower attached to 1-story stone office and keeper’s house; 190 mm lens. This is the last lighthouse built by the Spanish in Puerto Rico; American forces placed it in service several months after conquering the island. The city replaced the lantern and restored the lighthouse in 2001-02 and has opened the building as a historical museum.

1880. Active; focal plane 260 ft (79 m); white flash every 15 s. 45 ft (14 m) cylindrical stone tower; DCB-24 aerobeacon. The original 1-story neoclassical stone keeper’s house is used as a nature center and marine laboratory. This beautiful and well-preserved Spanish lighthouse is the oldest surviving lighthouse in Puerto Rico. It was repaired after being heavily damaged by the San Ciprián hurricane in September 1932. The Puerto Rico Conservation Trust purchased the surrounding land in 1975 and restored the lighthouse in 1990. Located in the Cabezas de San Juan Nature Reserve on the northeasternmost point of the island, northeast of Fajardo, commanding a spectacular view. Site and tower open to guided tours Friday through Sunday (reservations required).  The Fajardo Lighthouse is the southernmost point of the Bermuda Triangle

1886. Reactivated (inactive 1959-1975); focal plane 305 ft (93 m); white flash every 10 s. 43 ft (13 m) cylindrical stone tower rising from the center of a 1-story stone keeper’s house. As of late 2000, the building was in ruins, severely damaged by vandals and by Hurricanes Hugo (1989) and Marilyn (1995). This is another lighthouse on the Lighthouse Digest Doomsday List. The building is reported to be hazardous inside. In 2003 ownership of the light station was transferred from the Culebra National Wildlife Refuge to the Municipality of Culebra.

1896. Inactive since 1926. Octagonal cylindrical stone tower rising from the center of 1-story stone keeper’s house. The active light (focal plane 56 ft (17 m); white flash every 4 s; USCG 1- 31715) is on a skeletal tower next to the lighthouse. Lantern removed. Endangered by decay and lack of maintenance, the lighthouse has fallen into ruin and has been added to the Lighthouse Digest Doomsday List. The lighthouse is in the former U.S. military base area; the Navy withdrew from these bases, after years of public protests, in May 2003. Located on the central south coast of Vieques inside the former Camp Garcia Marine Base

1892. Active; focal plane 111 ft (34 m); two white flashes, separated by 10 s, every 30 s. 49 (15 m) ft octagonal cylindrical brick tower rising from a 1-story brick keeper’s house; 190 mm lens. The original 3rd order Fresnel lens, somewhat damaged by vandals, remains in the tower but is not in use. Located southeast of Maunabo on a sharp promontory at the southeasternmost point of the island. Site open, lighthouse and tower open daily Wednesday through Sunday.

1893. Inactive since 1938. Approx. 50 ft (15 m) octagonal cylindrical brick tower attached to 1-story brick keeper’s house. The original lantern and lens were destroyed by vandals in 1969. By early 2001, the lighthouse was in very poor shape, with no roof and only scraps of its lantern; this earned it a spot on the Lighthouse Digest Doomsday List. However, the Compañía de Parques Nacionales beautifully restored the lighthouse in 2002-03. The restoration cost $2.3 million and is part of a larger project creating a public recreation facility in the area. On the beach nearby is the metal ruin of a former range light, also long abandoned.

1893. Inactive since 1950. Octagonal cylindrical masonry tower attached to a 1-story masonry keeper’s house; lantern removed. The tower and and keeper’s house are in ruins. The lighthouse was replaced by a buoy offshore. The lighthouse is within a commonwealth nature reserve, Bosque Seco de Guánica (Guánica Dry Forest). Located on PR 333 about 2.5 km (1.5 mi) south of Guánica, where the lighthouse formerly marked the east side of the entrance to the Bahía de Guánica. Site open, tower closed.