The history of Vieques is tied up with the history of the U.S. Navy. During its occupation of the island, the Naval Ammunition Facility (NAF) built a network of naval magazines in Vieques – hundreds of bunkers for ammunition storage, built into the hills, camouflaged beneath earth and grass on the western side of the island. The Magazines are built of concrete and from the air you would find it hard to see the magazines since they were well camouflaged. They were strategically placed so they look like hills from the air and they are covered by earth and grass. They’re a bizarre and eerie reminder of what once took place on the island. The older ones, built during World War II, are so well hidden that they can be easily mistaken for rolling hills. A few are unlocked, if you want to venture in.  The Conservation Society has recently come in to maintain them, with more plans in the works apparently. 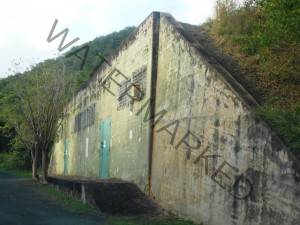 How to Get There:

Located about 4 miles past Mosquito Pier along Route 200, there is a paved, unmarked road.  The road is difficult to find, as there are no signs for it, so you might ask a local for help. It is located in the same woody area as the Sugar Mill ruins.  It is miles of roads littered with bunkers so spend a couple of hours driving the roads and chances are you will pull alongside a bunker or be standing on top of one.

This is a fun day trip if you are getting tired of the beaches (hardly imaginable, but possible).  Paired with a visit to the Sugar Mill Ruins and maybe the Pier or the Ceiba Tree, this trip will take about a half a day if you really take time to explore all of the roads.  There is no signage and many of the bunkers look similar except for their numbers, so it is easy to wonder if you are backtracking, mixed up, or just plain lost.

However, there is something about getting lost that is sort of fun, and on that note, here is some quote inspiration from our trip to the Vieques Bunkers:

If you don’t get lost, there’s a chance you may never be found.  ~Author Unknown

It is good to feel lost… because it proves you have a navigational sense of where “Home” is.  You know that a place that feels like being found exists.  And maybe your current location isn’t that place but, Hallelujah, that unsettled, uneasy feeling of lost-ness just brought you closer to it.  ~Erika Harris,

Liked this article about the Vieques Bunkers? Join the Crew and Start the Journey! Connect with Us for News, Events, Lifestyle, and all things Caribbean by joining our Newsletter – Click Here to Join or find us on Facebook or Instagram.