Puerto Rico was first “founded” in 1493 by Christopher Columbus on his second voyage.  Over the following 600 years, the island was a colony of Spain, beat off attacks by the British and Dutch, among others, and finally was lost in the Spanish American War in 1898 to the Americans.  Over those 600 years, the boundaries and names and important landmarks have changed.  Taking a look back at old maps and comparing them to the new maps demonstrates some of the interesting changes that have happened in history and culture and people’s understanding of the geography….

This map shows the various Taino tribes that were located in Puerto Rico at the time of Columbus’ arrival in 1493.  At the time, the island was called Boriquen by the natives.  The Conquistadores christened the island San Juan, but due to a typographical error on transcribing maps back in Spain, the name for San Juan and Porto Rico were switched. 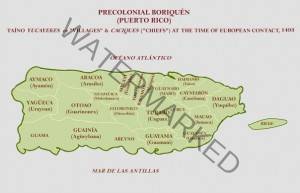 These maps all look distorted and vague, yet the coastlines are very clear. This demonstrates the importance and use of the maps for sailing purposes.  It also shows how little permanent dent was made into the interior of the Island.  During this time there were constant clashes between the Europeans and Tainos and with disease, war, etc. it was difficult for the Europeans to access and maintain control of the central mountainous region. 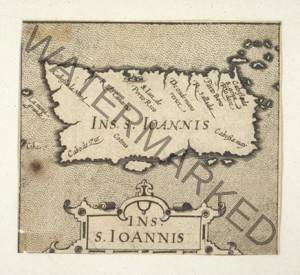 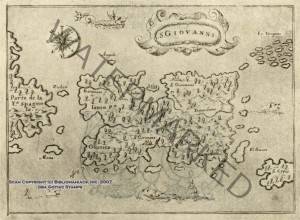 By this time, the maps have become incredibly detailed. The interior mountainous region has become populated and the coffee and sugar industries are in full force exporting around the world. 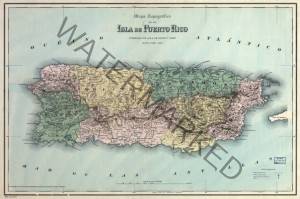 With the Americans taking over Puerto Rico at the turn of the century, there are many changes going on – political and economic.  Sugar takes over as the monoculture and is increasingly industrialized.  Railroads and roads are built to facilitate the movement of sugar cane.  The importance of this industry is seen in how the roads and railroads are built. 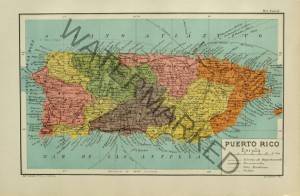 To see more maps of Puerto Rico, both then and now, you can check out these links:

To purchase your very own PR Map – perfect for framing: