For many years, visiting the abandoned sugar mills (Centrales) in Puerto Rico was a favorite pastime.  Long since closed, the ruins of the sugar mills are decaying and in disrepair.  It is a shame that more isn’t being done to preserve such an important part of history.  The production of sugar was an important aspect of Puerto Rico’s history.  The rise and fall of the sugar industry had much to do with it’s colonization by first Spain, then the US and it’s effects were wide-reaching.  Although defunct today, it provides an interesting insight into this time in history.  As the years go by, it is becoming more difficult to appreciate them due to deterioration, vandalism, and sell offs of the metals, so if visiting these mills are of interest to you, the time is now to check them out.

Photos are of Central Guanica: Then and Now

A Short History of the Sugar Industry in Puerto Rico (Source: EnciclopediaPR).

The cultivation of sugar cane and the production of sugar largely forged the local and international identity of Puerto Rico until the 20th century. According to historical documents, the first farms producing the sweetener date to the 16th century. These sugar mills were known locally as ingenios or trapiches. In 1523, Genovese native Tomás de Castellón established in San Germán the first sugar mill, called San Juan de las Palmas. Others were founded in the 1540s along the banks of navigable rivers near San Juan. From the late 17th century on, huge extensions of land were dedicated to commercial agriculture. Those dedicated to raising sugar cane were called haciendas azucareras, the sugar plantations.

In the following centuries, several historical events affected the cultivation and processing of sugar. Except for the decline in sugar production that occurred in the 17th century, the industry exp

erienced various periods of prosperity. The first significant surge occurred between 1790 and 1849. It was largely due to the agrarian reforms of 1776 and the Real Cédula de Gracias of 1815. These measures partially revoked the Spanish monopoly on commerce, as well as making it easier to traffic in African slaves. Also, demand for Puerto Rican sugar by the United States increased as production and export of sugar from Haiti were affected by the chaos of the Haitian revolution. By the middle of the 19th century, there were 789 sugar plantations in Puerto Rico.

Despite this increase, cultivation and processing of sugar went through difficult times at the end of the 19th century. Various factors contributed to this decline, including the depreciation of unrefined sugar and a reduction in production volume caused by plagues, droughts and hurricanes. Obligatory taxes and the technological backwardness of most of the plantations combined to worsen the problems. Events such as the abolition of slavery in 1873 and the tariff wars between Spain and the United States also adversely affected industry conditions.

With the establishment in 1873 of the first sugar factory, the San Vicente mill in Vega Baja, the industry and its diverse forms of production began to be transformed. New technologies were developed in the mills, which produced their own electricity for machinery for processing the sugar. Some of the old plantations transformed their operations and became mills. At the same time, the Puerto Rican colono arose, farmers who grew cane and sold it to the mills for processing. 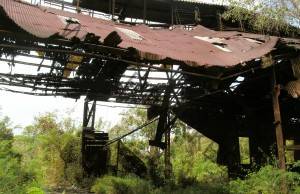 In 1898, following the Spanish-American War, the industry experienced additional changes. United States investors replaced many of the established European investors on the island. Huge sugar mills such as the Guánica Central and Fajardo Sugar were established. The increase in the price of sugar on the world markets, as well as the investment of capital, made Puerto Rico into one of the principal producers of sugar internationally. Despite this, the sugar industry required a large number of laborers who were submitted to conditions similar to those of slavery.

During the first decades of the 20th century, the sugar industry continued to develop and reached its peak. Despite the establishment of huge sugar trading businesses, some mills backed by Puerto Rican capital also showed considerable production capacity. By 1930, there were 44 mills in operation. In the 1940s, however, the mills began to weaken, due to various factors. The fall in the price of sugar, mismanagement by some administrators, the restriction of credit to independent farmers, as well as the strikes by workers, created conflict and conditions that led to the decline and eventual closure of many of the mills in the subsequent decades.

Following the record sugar cane harvest of 1952, the industry experienced an accelerated deterioration. Additionally, the production of sugar took a lower priority as the government undertook to industrialize the island. Between 1951 and 1968, 17 mills ceased operations. At the end of the 1960s, the government tried to rescue the industry through a recovery program. The Land Authority acquired a significant number of mills and in 1973 created the Sugar Corporation. Despite the fact that the government became the principal sugar producer in Puerto Rico, the mills, both privately and publicly funded, were shut down, one by one. In 2000, operations ceased at the last mills still functioning: Roig in Yabucoa and Coloso, which had operated for nearly 100 years in the municipality of Aguada. Some of the mills also included refineries and packaging operations whose refined white sugar, with its fine grain, built the reputation of the Puerto Rican sugar producers as true artisans.

To read more about the Centrales and see Photos, check out this website which is excellent: EnciclopediaPR Sugar

Centrales in operation in 1940, location (closest town) and date they closed down:

News and Recent Efforts to revive the sugar industry: